Foibles, Fables and Other Imaskinations

As I searched for material for this show, I looked for stories that hearkened back to the very early purpose of story. I sought stories that teach, assure, and lend guidance to it’s listener in troubled times. The stories that form the core of, “Foibles, Fables, and other Imaskinations”, are old, even ancient stories from four diverse cultures and are influenced by four different religious traditions. 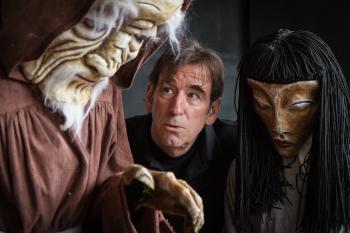 What I have found in my search for stories is that each religion has built a body of stories that teach and lead it’s adherents into moral, ethical, and purposeful lives. These stories comprise some of humanity’s greatest wisdom. It is from this body of work that I have chosen the stories.

There are four stories that I choose from in this performance. “Foibles, Fables, and other Imaskinations”, originate on two different continents, Asia and Europe, and in four different countries or areas, Korea, India, France and Eastern Europe. Each also bears the influence of the culture and the dominant religion at the time of its origination. 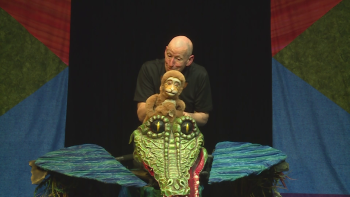 “A Simple Gift”, is a classic story believed to have originated in medieval France. First appearing in print in the late 1800’s, “The Juggler of Notre Dame.” was recorded by Anatole France. This particular story comes out of the Christian tradition and happens during the Christian celebration of Christmas. A poor juggler, unable to afford a gift for the Madonna and Child realizes that he has one gift he can give, his juggling. He offers his gift of juggling and a miracle occurs. I have titled my version of the story, “A Simple Gift.” The story reveals to us that the most unlikely gift given is often the most meaningful.

“It Could Always Be Worse” is a humorous tale from Eastern Europe. This story comes out of the deep Rabbinic tradition of storytelling of the Jewish faith. This has also been called a “Yiddish” tale. The teachers, or Rabbis, used stories and parables to illuminate the spirit of the law and to instill traditional values to help them with their daily lives. “It Could Always Be Worse” may have been a story told to help someone deal with a seemingly hopeless situation. A man is living with his large family and in-laws in a small one-room shack. He is desperate for relief. His Rabbi prescribes a solution. It does not take long for the man to realize, “it could always be worse.” 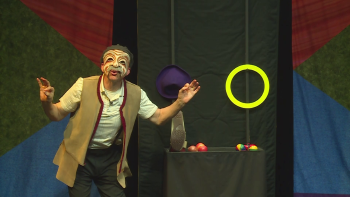 “The Crocodile and the Monkey” is a story that comes from a body of work called the Jataka Tales. These tales originate in India and are widely accepted and used in the Buddhist religious tradition. In the “Crocodile and the Monkey”, a crocodile lures a monkey onto his back to cross a river with the promise of juicy mangos and papayas on an island far from the monkey’s reach. When mid stream, the crocodile reveals that he has tricked the monkey and intends to eat the monkey’s heart. The quick-witted monkey then tricks the crocodile and is taken back to the shore. This cautionary tale is a reminder to be wary of the crocodiles of the world.

“The Tiger’s Whisker” is a story that has its origin in Korea. This story reflects the values of the Chinese philosopher Confucius. Confucianism has been a powerful influence in Korea since the 14th century. Confucianism emphasizes human-heartedness, and encourages qualities such as self-discipline, self-restraint, and the value of learning. “The Tiger’s Whisker” is a story of a young woman’s journey to find healing and wholeness for her husband who has been traumatized by war. A mountain healer sends her on a quest to find a special ingredient for a potion that will help her husband. What she learns from this quest, the search for the tiger’s whisker, is as relevant today as it was in ancient times.

“…you are one of the rare performers who has the ability to capture the attention (and imagination) of an entire audience in a big room (1,400+ seats) as soon as you open your mouth!” Pike Performing Arts Center