What you might experience in a performance of “gems”

Doug Berky’s approach to storytelling is one that believes that stories should be seen as well as heard. Each story lends itself to a manner of revelation. With the tools of improvisation, mime, masks, voice, and puppetry, Doug works with the story to let it express itself. The result is a visual feast filled with fanciful characters, dramatic and comic twists and turns, and “Gems” of wisdom passed down to us from many peoples around the world.

Some of the current stories you might experience in a “Gems” performance include:

LION AND THE MOUSE

A small mouse is caught by a lion. The mouse pleads for his freedom. The King of Beasts releases the mouse thinking it unworthy to eat. Later, the lion is caught in a man made trap. The mouse happens by, chews the netting that is trapping the lion and frees him. When the lion asks the mouse why the mouse helped him, the mouse replies, “an act of kindness is never wasted!”

THE LAME MAN AND THE BLIND MAN

A Sufi tale – the Middle East

A lame man and a blind man are invited to a feast at the sultan’s palace. Both lament that they cannot attend. The blind man is afraid that he will become lost on the mountain paths. The lame man is concerned he will not be able to walk up the steep mountain trails. A passing friend laughs at their concerns saying, “the two of you have everything you need to get to the Sultan’s palace!” 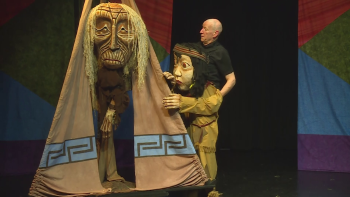 A very young boy petitions the “Mountain Man” to help him receive the bow making power so he might provide for his ailing grandmother. After searching the boys motives the Mountain Man says, “because you have wished nothing for yourself and want only to serve others………you will make a fine bowmaker,” and the boy and his grandmother were never in need again.

THE BOY WHO CRIED WOLF

Aided by the audience in this interactive version of this classic tale, a desperate boy realizes that his prankish schemes are the reason no one comes to his rescue when a real wolf appears among his sheep. As the wolf states, “even when a liar tells the truth no one will believe them” ( No animals or children are harmed in the telling of this story.)